Israel Adesanya is fighting to become the
Greatest Mixed Martial Artist Champion of All Time.

He’s regarded as one of the best strikers in the world and loved by fans for his commanding charisma, unapologetic personality and super-star showmanship.

“I want to create those iconic moments throughout history. Forever. So by the time it’s done, After I’ve fought everyone and beaten everyone. They can say this is the guy. He’s the one. He’s the G.O.A.T.” —Israel Adesanya 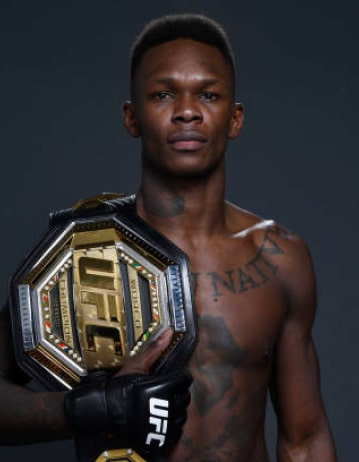 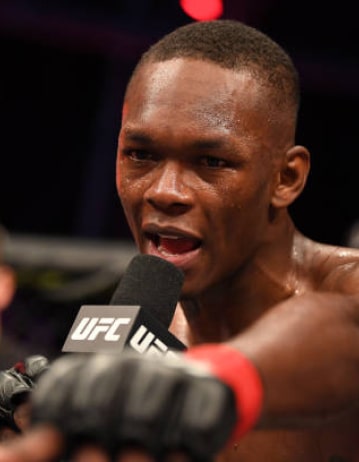 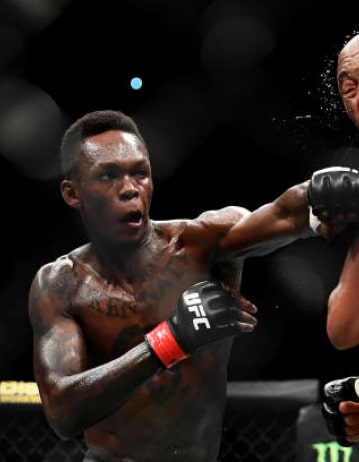 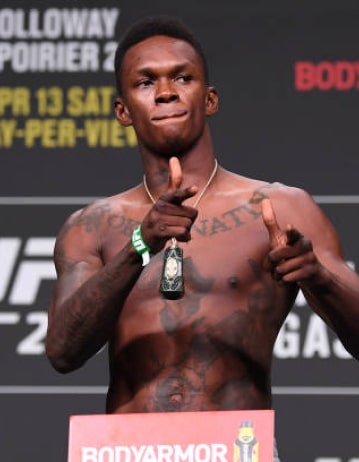 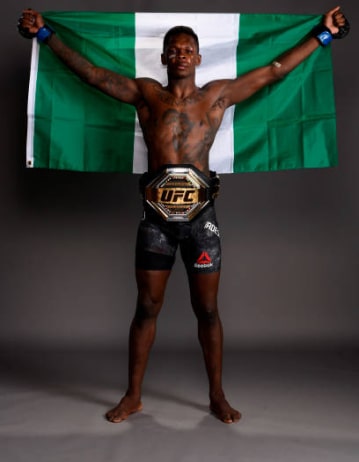 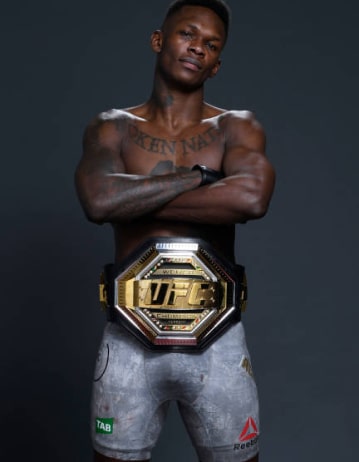 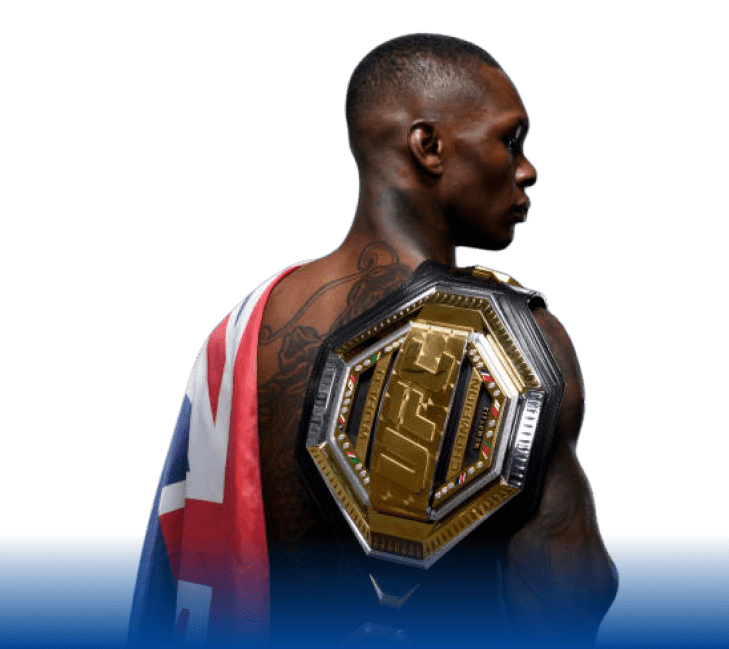 Israel Adesanya is fighting to become The Greatest Mixed Martial Artist Champion of All Time.

He’s regarded as one of the best strikers in the world and loved for his commanding charisma, unapologetic personality and super-star showmanship. 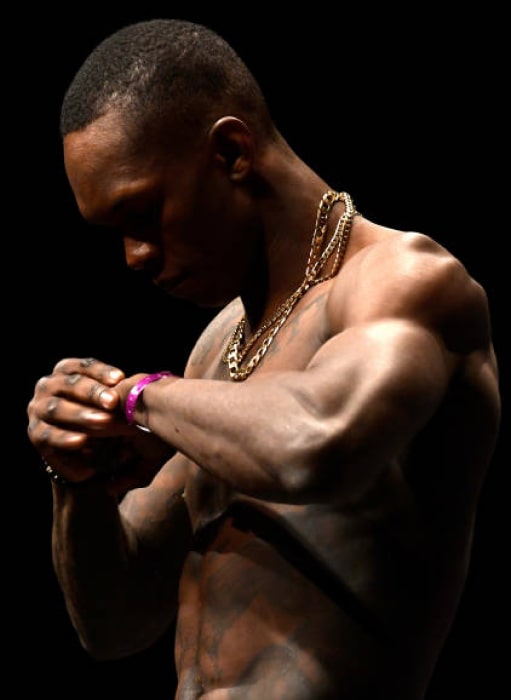 Israel’s goal is to be his authentic and raw self so you can be reminded to be unapologetically yourself too. Israel believes that by being authentically yourself, you tap into something that everyone can relate to.

“If you are authentically you and express yourself truly, no one can fuck with you. You have to be yourself. You can’t be anyone else but your best you.” 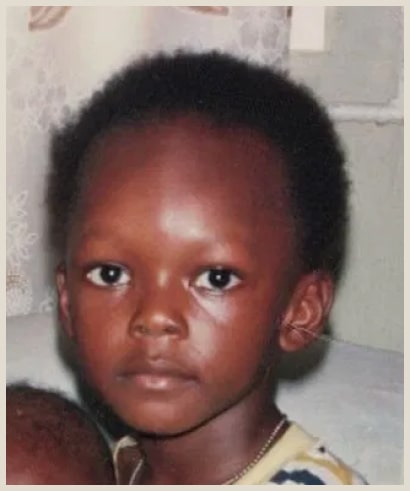 Israel Adesanya was born in Lagos, Nigeria and the oldest of 5 children. He was raised comfortably in an upper-middle class family.

“Life was really easy for me because my family was well-off and everything was taken care of. I didn’t really have to worry about anything. Apart from getting in trouble.” 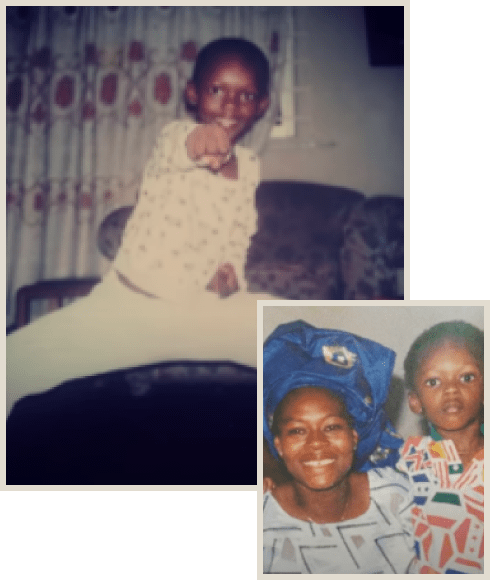 2001
From Nigeria to New Zealand

His family immigrated to New Zealand in 2001 because they wanted a better education for their children. Growing up, Israel was faced with discrimination at a young age

“I was trying my hardest to fit in. But look at me I wasn’t born to fit in. I stick out like a sore thumb. I was about 10 years old and this kid kept on riding past my house on the weekend. Hurling insults at me and my family. Go back to your country, Blackanese.”

“I’m a Nigerian kid. We live in New Zealand trying to fit in constantly in different places but never fit in anywhere. So I’m a native who was broken. The broken piece. I never fit into any puzzle so I’m just gonna stand out and own me.” 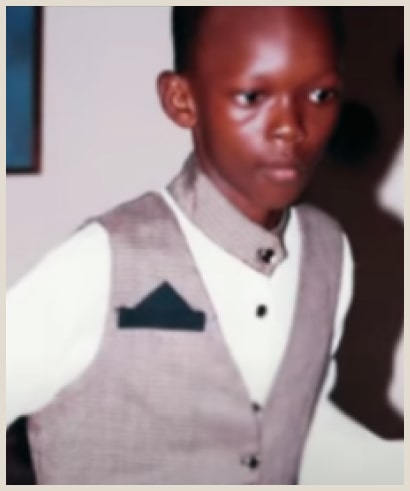 2004
Dance Culture is My Culture

Israel’s discovery of dance during high school was a defining moment. For years he would dance under the name “Black Magic”. Krump, pop & lock, and breaking are all styles of dance that he’s been influenced with growing up.

“I first learned how to dance from a friend of mine in school. I’d hang out with dancers and they’d show me new moves. I’d copy it – I’m a good copycat. And the things that make me the fighter I am – the athleticism, the rhythm – fit right into dancing, too “ 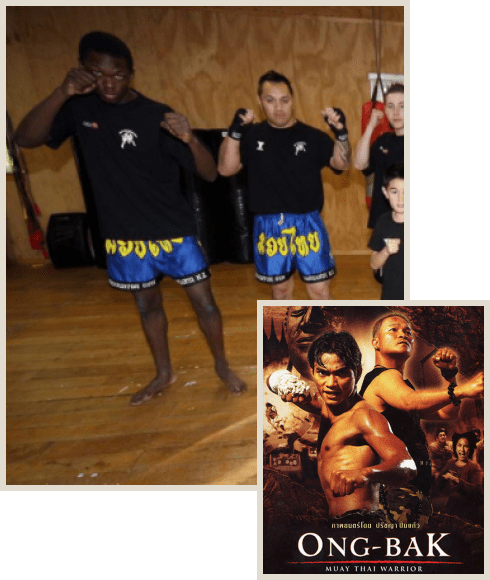 2007
From Watching Action Movies to Being the Action

When Israel was 18 he was inspired by a Thai action movie called Ong Bak. Moved by the movie and impacted by his years of being bullied, he abandoned college and was inspired to start training Muay Thai.

“I remember as a kid seeing the movie Ong Bak, starring Tony Jaa. He was doing all this crazy shit and I'm just like, 'Fuck – that's cool. I want to be a fighter'. I started training in Muay Thai and six weeks later, I had my first fight. Crazy. ... That was 2008 and I was still a teenager. 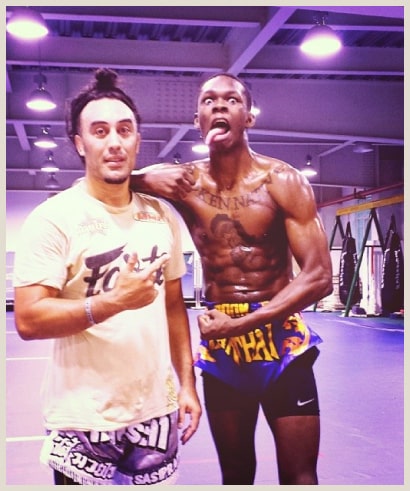 As a favor to a mutual friend, Eugene Bareman ended up cornering Israel According in the MMA Fight despite meeting him for the first time.
‍
"He'd watched Brazilian jiu-jitsu on YouTube a week ago, maybe done some judo. So I said, 'OK, this is not what I expected.' I was underwhelmed. He got his ass kicked, and I was like, 'OK, you go on your way, I'll go on my way.'"  —Eugene Bareman,
‍
“In hindsight, I’m glad that first fight happened the way it did. If I’d won that fight, I would have been like, ‘I’m the man, I’m the fucking greatest, I’m the shit, no one can touch me’. It showed me I had a lot to learn in MMA.” —Israel Adesanya 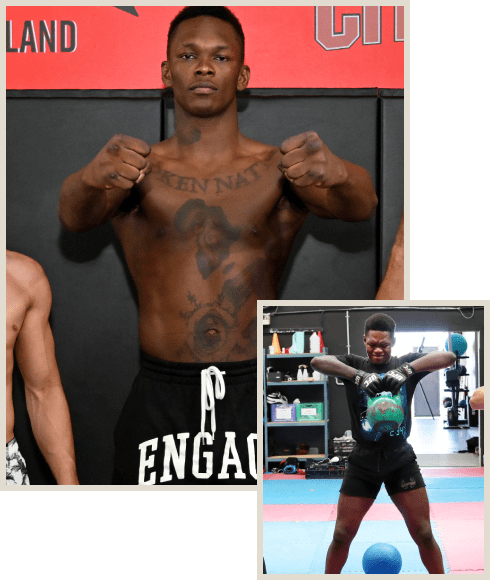 After being cornered by Eugene Bareman in 2010, Israel decided it was time to move on from his Muay Thai coach. He took everything he had and packed it in his car and moved seeking guidance from Eugene at City Kickboxing Gym.

Bareman recommended Israel try out different gyms but there was no stopping Israel. He was captured by a strong spiritual connection at City Kickboxing. That was the start of a budding relationship between pupil and master.

“I already decided that was the gym I wanted to train at. It was already set in stone so he couldn’t get rid of me. When I moved to Auckland he kind of tried to like give me options but I was like ‘nah, I’m good’ —Israel 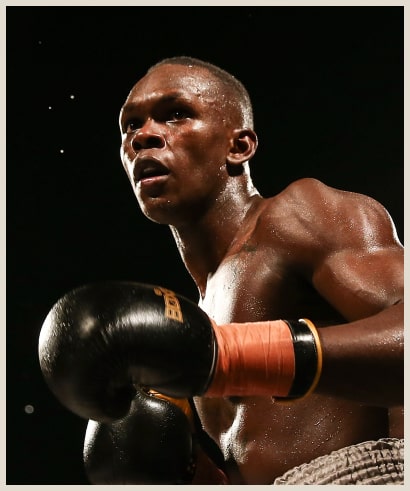 Israel would go on to have only one amateur fight, the one that he lost. Under Bareman’s wing, Israel dominated the New Zealand kickboxing scene, going undefeated over 32 fights before moving to China. 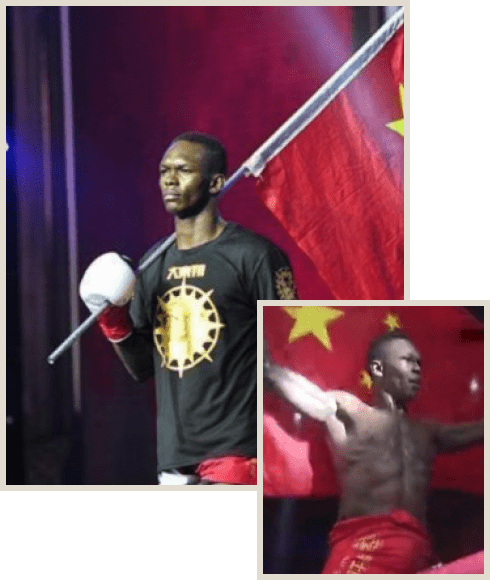 As part of Eugene Bareman’s master plan, Israel moved to China for 8 months and competed in kickboxing. By living in poor conditions and a foreign country this allowed him to focus on training solely at becoming a better fighter.

He would garner fans who called him “The Black Dragon” before returning to New Zealand in 2014. He fought 24 times in China, winning every bout.

“Those days made me the man I am today. I was out there in China, making my way. I was alone and I just said to them, ‘let me fight, I’ll fight whoever you want’.” 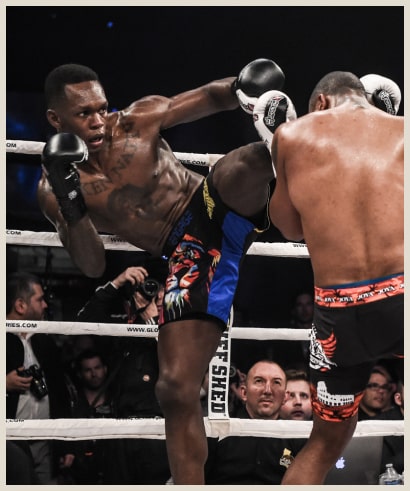 Israel returned to New Zealand in 2014 and began competing in Glory Kickboxing and King in the Ring. He racked up a record of 75 wins and 5 losses in kickboxing and 48 of those kickboxing wins by KO.

Within 18 months in his respected home of New Zealand, Israel would win The King in the Ring Tournament 3 times. He went 9-0 and earned the most titles in King in the Ring tournament history. As a professional boxer, Adesanya would go 5-1 from 2014-2015 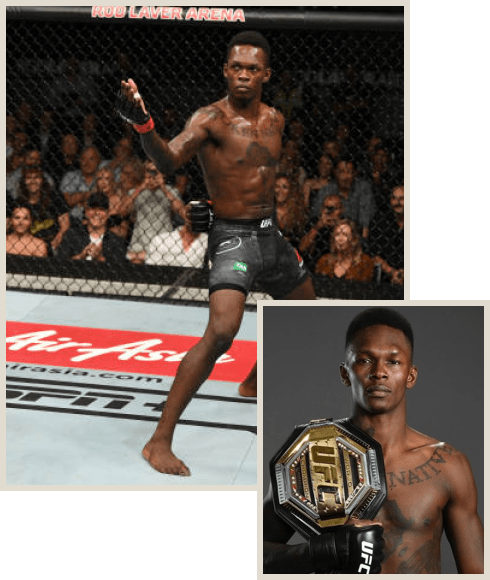 In 2015 Adesanya sent a message to UFC President Dana White telling him that all he needed to do was get him in the cage and he’d do the rest.

Dana never got back to him. But as time passed he’d rack up an unbeaten record in MMA and the UFC couldn’t refuse. Israel made his UFC record just 3 years after sending that message.

After stopping Rob Wilkenson in a dominant debut he showcased his star charisma by saying “I’m the new dog in the yard, and I just pissed all over the cage” 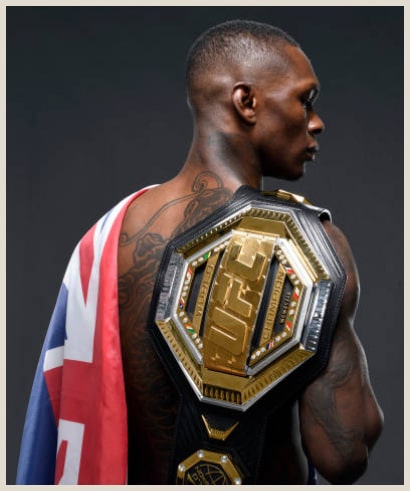 Since joining the UFC, Israel’s racked up back-to-back wins in the Middleweight division and has been undefeated in his Professional Mixed Martial Arts career.

He’s defended his title twice in the UFC and is moving up in weight class to claim Championships across different weight classes.

Israel has the intentions of being the Greatest of All Time.

“Gratitude is my attitude. Used to sit by the water cooler during lunch at my old job and daydream of doing things like this” —Israel Adesanya 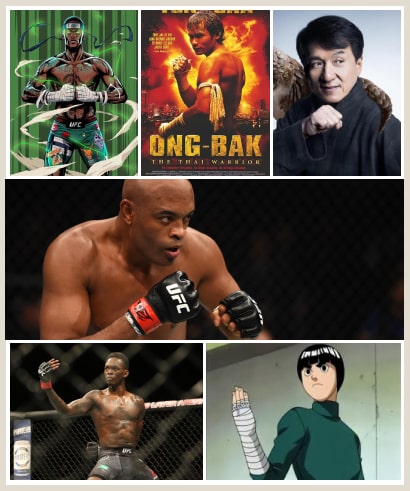 Israel’s an avid anime fan who’s watched anime like Naruto and Death Note. From watching the Avatar: The Lastbender, he’s taken inspiration in his nickname, “The Last Stylebender”.
‍
As a teenager, three things sparked Adesanya's love of fighting: Ong-Bak, Jackie Chan and Anderson Silva.
‍
"Everybody hails Bruce Lee, but Jackie Chan is who put me on [to martial arts]," he said. "I liked the way he fought, it was more comical. Bruce Lee mesmerized, but Jackie Chan was lit. …

I used to say you could never pay me to do this shit, but that changed when I saw Anderson Silva on DVD. He was this skinny black guy, and he was so playful but he also fucked them up.

UFC Middleweight Champion of the World

In my wildest dreams I always imagined this would happen #imagination 💭💫

Losses are part of life, and losses are something I deal with occasionally. Just this is my first one in MMA, but as they say, it is what it is. If I was going to lose to anyone, what better guy to lose to than a guy like Jan. A classy champion.
‍
How we go back to the drawing board and it’s kind of fun. This is the dip in my story. This is the failure if you will. Then I’ll rise up again like the phoenix that I am.

You’ll see me back at 205 pounds later in the future. Right now, I’ve got a division I’ve got to dominate.

Everyone who supports me, all my people, I appreciate you. I’m sorry.

I like to make my fans be proud when they say what I’m going to do, what I’ve already said being champ-champ or double champ. I’m sorry I let you down but if you want to get off the hype train, get the fuck off the hype train.

We’re just stopping for a little gas. Understand? You can get the fuck off, but if you want to stick with me, stick with me and trust me, I’ll show you a good time. It’s going to be a fun ride. I appreciate y’all.

What I have always predicted to do in this game is change the game, change history. When it's all said and done, they'll say that guy Izzy, he's the one. He's the G.O.A.T

I can't wait til this documentary. I really want to show people what we can do. I want this to be more like the soccer mom can watch, someone from the burbs, someone from Alaska can watch it and still relate. I'm looking forward to really putting that out.

Own an Animation Production Company

I wanted to be an animator when I was growing up. I will have my own production company after fighting, and I will hire people who will actually bring my vision to life.

I want to bring attention to my people in Nigeria because I feel they deserve it but also they can earn it.

The whole crew with me.
The gang gang.

Eugene Bareman.
A Father Figure. Yoda. The Yin to my Yang.

The highlight of my trip being surprised with a purple belt by Andre Galvoa (Dec 2020).

Anderson Silva said to me -
I pass the baton to you. I'm telling you this is iconic in history. I think I need the picture framed as well

The whole crew with me.
The gang gang.